Move From Zendesk to Help Scout

The Zendesk import tool allows you to import your entire ticket history (including customer profiles) from Zendesk into Help Scout. Your Zendesk data will remain untouched! Help Scout will only import a copy of each ticket and customer profile.

Things You Should Know

Here are a couple of key points to remember before flipping the switch on the import tool:

You'll likely use the same support email address as you do in Zendesk.
For example, messages sent to support@domain.com will no longer be forwarded to support@yourdomain.zendesk.com, but rather to your unique mailbox alias that looks something like this: support@jg-clothing.helpscoutapp.com.

Help Scout does not have a web portal.
This is more of a transition for your customers, but be prepared to direct them to your dedicated support address. Since Help Scout is entirely email-based, you'll be providing top-notch email support going forward. You can always connect a custom contact form if another ticket channel is needed.

There are some tiny differences between status options.
Here's how they line up post-import:

Zendesk tags will be imported to Help Scout.
You'll see the same tags on the same tickets, of course. You can clean up or merge tags after the import if needed.

Zendesk custom fields will not be imported to Help Scout.
Custom fields in Zendesk are different in form and function to Help Scout's Custom Fields and there is no method to include them in the import.

Help Scout does not have a ticket "type" field.
We're unable to maintain the problem-incident ticket relationship seen in Zendesk. Although those tickets will be imported, they will not be linked together in Help Scout via the ticket type.

The import process may take time to finish.
You're looking at roughly one hour per 1,000 tickets, so large accounts can take a few days or more. However, your tickets are imported newest to oldest so, within a couple of hours, you'll have the most recent data.

1
Grab your Zendesk API key from  Settings > Channels > API. You'll need to generate a new token, and copy it your clipboard.

Bounce back to Help Scout and navigate to Manage > Company > Import data to configure the importer, and select Zendesk from the list. Insert your Zendesk sub-domain, an administrator's email address, and your Zendesk API key. Select which mailbox to import tickets to, then press the Next Step button. 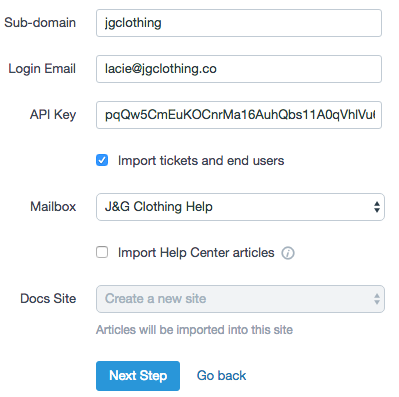 Note: In your browser's address bar, the sub-domain is the text preceding .zendesk.com. For example, in the URL  mycompany.zendesk.com, the sub-domain would be  mycompany.
3
On the next screen, choose to import all of your Zendesk tickets, or only tickets created after a specific date. If you already have User accounts created, make sure to select the appropriate matching User from the dropdown menu. You might want to tag imported tickets just so you know what's what. We'd also recommend importing attachments, so you have a complete record of each ticket. 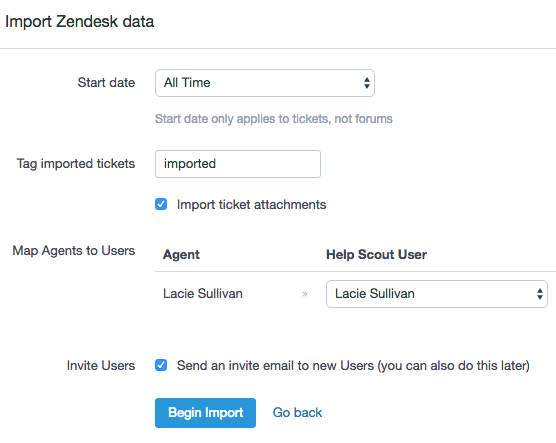 4
Remember: if you're importing a bunch of tickets, the import process could be lengthy. Once you've started the import, you can close the page and get back to work. We'll email you when it's all wrapped up!

Note: If you run a second import at any stage, only new conversations will be imported, rather than new replies on previously imported tickets. We recommend having a team member work in Zendesk to manage incoming replies after you set up your forwarder and before your second import. Replies to those emails will get looped back to Help Scout courtesy of the forwarder.

After my testing, I deleted all of the imported tickets and knowledge base articles in Help Scout so I can re-import them in. Is that possible?
Unfortunately, no. We'd recommend only importing the tickets and articles in only once you're ready to start working within Help Scout, since we don't support re-importing in all the same data again.

How do I know which tickets were imported?
Imported tickets contain a tiny bit of text that looks something like this: Conversation imported from Zendesk ticket #723.

Can I import knowledge base articles from multiple Zendesk subdomains?

For knowledge base articles you can - though you'll need to do it one at a time. Let's say you have 3 Zendesk knowledge bases with 3 different subdomains. From the Import Settings page in Help Scout, enter the first Zendesk site subdomain you want to map to a Help Scout Docs site (either select an existing site from the dropdown menu, or create a totally new site). After that import is complete, you'll need to run two additional imports for the remaining subdomains.

For tickets/conversations: the help desk side of our importer does not support importing multiple Zendesk domains into a single Help Scout account.

Did this answer your question? Thanks for the feedback There was a problem submitting your feedback. Please try again later.
Updated on January 5, 2023